As World’s Population Booms, Will Its Resources Be Enough for Us?

There are more than 7 billion people on Earth now, and roughly one in eight of us doesn't have enough to eat. The question of how many people the Earth can support is a long-standing one that becomes more intense as the world's population—and our use of natural resources—keeps booming.

This week, two conflicting projections of the world's future population were released. As National Geographic's Rob Kunzig writes here, a new United Nations and University of Washington study in the journal Science says it's highly likely we'll see 9.6 billion Earthlings by 2050, and up to 11 billion or more by 2100. These researchers used a new "probabalistic" statistical method that establishes a specific range of uncertainty around their results. Another study in the journal Global Environmental Change projects that the global population will peak at 9.4 billion later this century and fall below 9 billion by 2100, based on a survey of population experts. Who is right? We'll know in a hundred years.

Population debates like this are why, in 2011, National Geographic published a series called "7 Billion" on world population, its trends, implications, and future. After years of examining global environmental issues such as climate change, energy, food supply, and freshwater, we thought the time was ripe for a deep discussion of people and how we are connected to all these other issues—issues that are getting increased attention today, amid the new population projections.

After all, how many of us there are, how many children we have, how long we live, and where and how we live affect virtually every aspect of the planet upon which we rely to survive: the land, oceans, fisheries, forests, wildlife, grasslands, rivers and lakes, groundwater, air quality, atmosphere, weather, and climate.

World population passed 7 billion on October 31, 2011, according to the United Nations. Just who the 7 billionth person was and where he or she was born remain a mystery; there is no actual cadre of census takers who go house to house in every country, counting people.Instead, population estimates are made by most national governments and international organizations such as the UN. These estimates are based on assumptions about existing population size and expectations of fertility, mortality, and migration in a geographic area.

In recent years we've been adding about a billion people every 12 or 13 years or so. Precisely how many of us are here right now is also a matter of debate, depending on whom you consult:The United Nations offers a range of current population figures and trends, the U.S. Census Bureau has its own estimate, and the Population Reference Bureau also tracks us.
The new UN study out this week projects that the world's population growth may not stop any time soon. That is a reversal from estimates done five years ago, when demographers—people who study population trends—were projecting that by 2045, world population likely would reach about 9 billion and begin to level off soon after.
But now, the UN researchers who published these new projections in the journal Science say that a flattening of population growth is not going to happen soon without rapid fertility declines—or a reduction in the number of children per mother—in most parts of sub-Saharan Africa that are still experiencing rapid population growth. As Rob Kunzig wrote for National Geographic, the new study estimates that "there's an 80 percent chance . . . that the actual number of people in 2100 will be somewhere between 9.6 and 12.3 billion."
A History of Debates Over Population
In a famous 1798 essay, the Reverend Thomas Malthus proposed that human population would grow more rapidly than our ability to grow food, and that eventually we would starve.
He asserted that the population would grow geometrically—1, 2, 4, 8, 16, 32—and that food production would increase only arithmetically—1, 2, 3, 4, 5, 6. So food production would not keep up with our expanding appetites. You might imagine Malthus' scenario on geometric population growth as being like compound interest: A couple have two children and those children each produce two children. Those four children produce two children each tomake eight, and those eight children each have their own two kids, leaving 16 kids in that generation. But worldwide, the current median fertility rate is about 2.5, (or five children between two couples) so, like compound interest, the population numbers can rise even faster.
Even though more than 800 million people worldwide don’t have enough to eat now, the mass starvation Mathus envisioned hasn't happened. This is primarily because advances in agriculture—including improved plant breeding and the use of chemical fertilizers—have kept global harvests increasing fast enough to mostly keep up with demand. Still, researchers such as Jeffrey Sachs and Paul Ehrlich continue to worry that Malthus eventually might be right.
Ehrlich, a Stanford University population biologist, wrote a 1968 bestseller called The Population Bomb, which warned of mass starvation in the 1970s and 1980s because of overpopulation. Even though he drastically missing that forecast, he continues to argue that humanity is heading for calamity. Ehrlich says the key issue now is not just the number of people on Earth, but a dramatic rise in our recent consumption of natural resources, which Elizabeth Kolbert explored in 2011 in an article called "The Anthropocene—The Age of Man."

As part of this human-dominated era, the past half century also has been referred to as a period of "Great Acceleration" by Will Steffen at International Geosphere-Biosphere Program. Besides a nearly tripling of human population since the end of World War II, our presence has been marked by a dramatic increase in human activity—the damming of rivers, soaring water use, expansion of cropland, increased use of irrigation and fertilizers, a loss of forests, and more motor vehicles. There also has been a sharp rise in the use of coal, oil, and gas, and a rapid increase in the atmosphere of methane and carbon dioxide, greenhouse gases that result from changes in land use and the burning of such fuels. 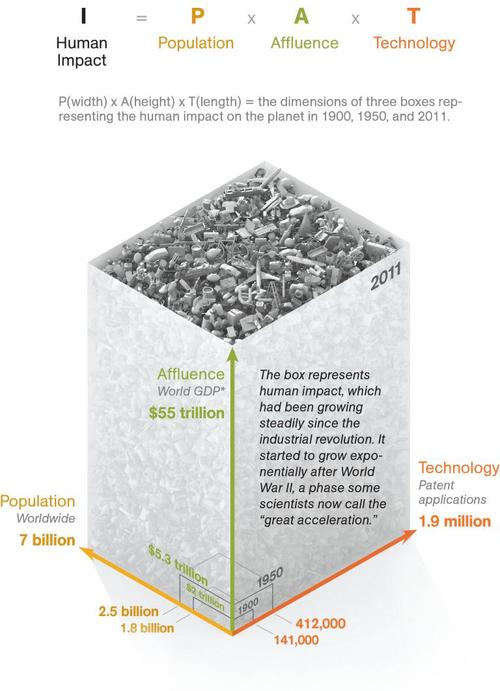 As a result of this massive expansion of our presence on Earth, scientists Ehrlich, John Holdren, and Barry Commoner in the early 1970s devised a formula to measure our rising impact, called IPAT, in which (I)mpact equals (P)opulation multiplied by (A)ffluence multiplied by (T)echnology.
The IPAT formula, they said, can help us realize that our cumulative impact on the planet is not just in population numbers, but also in the increasing amount of natural resources each person uses. The graphic above, which visualizes IPAT, shows that the rise in our cumulative impact since 1950—rising population combined with our expanding demand for resources—has been profound.
IPAT is a useful reminder that population, consumption, and technology all help shape our environmental impact, but it shouldn’t be taken too literally. University of California ecologist John Harte has said that IPAT ". . . conveys the notion that population is a linear multiplier. . . . In reality, population plays a much more dynamic and complex role in shaping environmental quality."
One of our biggest impacts is agriculture. Whether we can grow enough food sustainably for an expanding world population also presents an urgent challenge, and this becomes only more so in light of these new population projections. Where will food for an additional 2 to 3 billion people come from when we are already barely keeping up with 7 billion? Such questions underpin a 2014 National Geographic series on the future of food.
As climate change damages crop yields and extreme weather disrupts harvests, growing enough food for our expanding population has become what The 2014 World Food Prize Symposium calls "the greatest challenge in human history."
Population's Structure: Fertility, Mortality and Migration 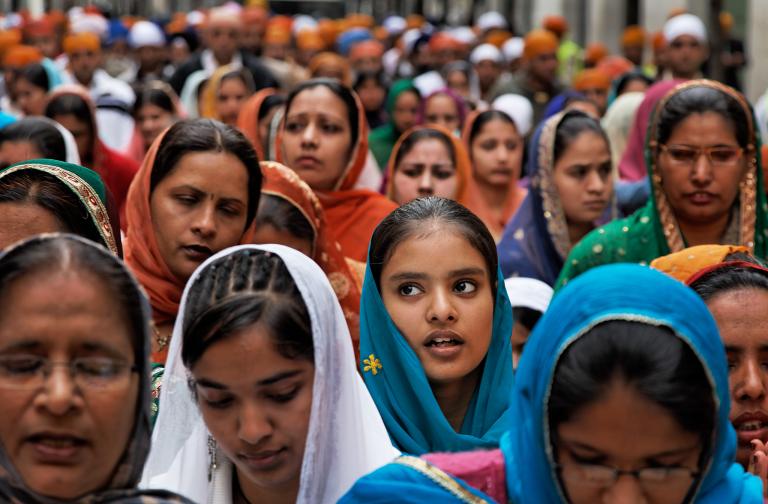 Population is not just about numbers of people. Demographers typically focus on three dimensions—fertility, mortality, and migration—when examining population trends. Fertility examines how many children a woman bears in her lifetime, mortality looks at how long we live, and migration focuses on where we live and move. Each of these population qualities influences the nature of our presence and impact across the planet.
The newly reported higher world population projections result from continuing high fertility in sub-Saharan Africa. The median number of children per woman in the region remains at 4.6, well above both the global mean of 2.5 and the replacement level of 2.1. Since 1970, a global decline in fertility—from about 5 children per woman to about 2.5—has occurred across most of the world: Fewer babies have been born, family size has shrunk, and population growth has slowed. In the United States, fertility is now slightly below replacement level.
Reducing fertility is essential if future population growth is to be reined in. Cynthia Gorney wrote about the dramatic story of declining Brazilian fertility as part of National Geographic's 7 Billion series. Average family size dropped from 6.3 children to 1.9 children per woman over two generations in Brazil, the result of improving education for girls, more career opportunities, and the increased availability of contraception.
Mortality—or birth rates versus death rates—and migration (where we live and move) also affect the structure of population. Living longer can cause a region’s population to increase even if birth rates remain constant. Youthful nations in the Middle East and Africa, where there are more young people than old, struggle to provide sufficient land, food, water, housing, education, and employment for young people. Besides the search for a life with more opportunity elsewhere, migration also is driven by the need to escape political disruption or declining environmental conditions such as chronic drought and food shortages.
A paradox of lower fertility and reduced population growth rates is that as education and affluence improves, consumption of natural resources increases per person. In other words, (as illustrated in the IPAT graphic here) as we get richer, each of us consumes more natural resources and energy, typically carbon-based fuels such as coal, oil, and gas. This can be seen in consumption patterns that include higher protein foods such as meat and dairy, more consumer goods, bigger houses, more vehicles, and more air travel.
When it comes to natural resources, studies indicate we are living beyond our means. An ongoing Global Footprint Network study says we now use the equivalent of 1.5 planets to provide the resources we use, and to absorb our waste. A study by the Stockholm Resilience Institute has identified a set of "nine planetary boundaries" for conditions in which we could live and thrive for generations, but it shows that we already have exceeded the institute's boundaries for biodiversity loss, nitrogen pollution, and climate change.
Those of us reading this article are among an elite crowd of Earthlings. We have reliable electricity, access to Internet-connected computers and phones, and time available to contemplate these issues.
About one-fifth of those on Earth still don't have access to reliable electricity. So as we debate population, things we take for granted—reliable lighting and cooking facilities, for example—remain beyond the reach of about 1.3 billion or more people. Lifting people from the darkness of energy poverty could help improve lives. 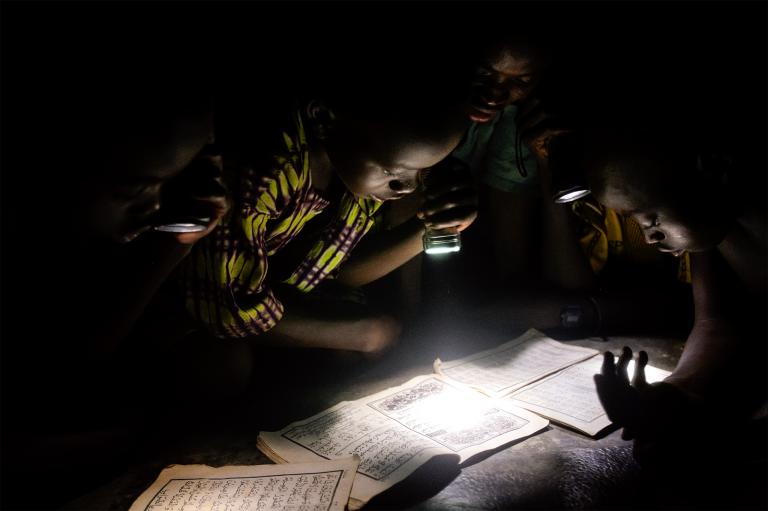 As World Bank Vice President Rachel Kyte told Marianne Lavelle of National Geographic last year, "It is energy that lights the lamp that lets you do your homework, that keeps the heat on in a hospital, that lights the small businesses where most people work. Without energy, there is no economic growth, there is no dynamism, and there is no opportunity."
Improved education, especially for girls, is cited as a key driver of declining family size. Having light at night can become a gateway to better education for millions of young people and the realization that opportunities and choices besides bearing many children can await.
So when we debate population, it's important to also discuss the impact—the how we live—of the population equation. While new projections of even higher world population in the decades ahead are cause for concern, we should be equally concerned about—and be willing to address—the increasing effects of resource consumption and its waste. 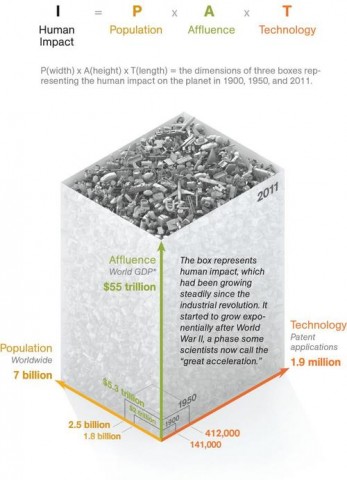