The world is connected, but some still wait for a plug 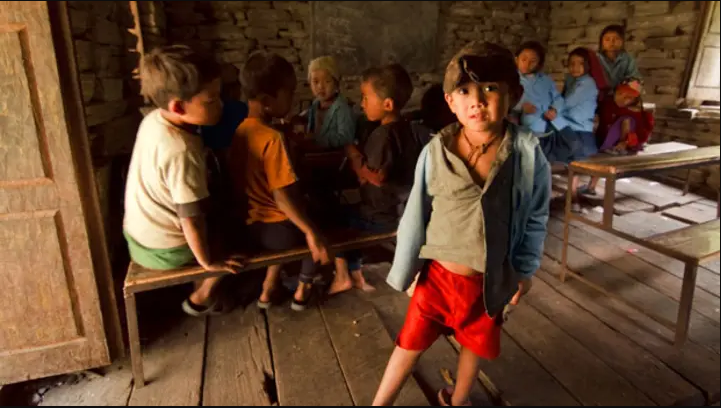 Children attend class in Dobhan, a village in Nepal’s Western Region. In many parts of Nepal, education is lacking and new technologies — like computers — are hard to come by. Photo by: Indrik myneur / CC BY

If you’re trying to captivate a group of students in a village where I come from, use a laptop.

I learned this in 2011 when I was in a village of Nepal, my home country, with a group of youngsters. We were in Dang, a rural town in the midwestern region of the country, to check out primary schools Grassroot Movement in Nepal, a nonprofit I co-founded, had rebuilt.

We wanted to hand out clothes, books and pencils and teach English in a class. But none of us had any teaching experience. One of us thought a laptop would help us engage students. After a 3-4 hour drive from Kathmandu, we were near the village. The road conditions were so poor that we left our van and got a lift from a truck to reach the village.

The next day in a class, we used a laptop to teach. A few kids asked me if it was a TV. I explained that it was everything: a TV, a notebook, book, radio, pen and a bag to store books and notes - all in one. They were awed.

While people are increasingly gaining access to mobile devices, the digital divide persists. There is a growing movement in the development community to use information and communications technology to help the poor. But there’s also a lack of urgency to bridge the digital divide so the poorest can benefit. Young people who can afford smart phones, use apps and take advantage of so-called massive open online courses usually come from a background very different than that of students in the remote villages of Nepal.

Most of the people who don’t have access to technology worldwide are women and minorities. Access to technology remains a privilege. Especially in patriarchal society like Nepal and most of the developing world, women are the last ones to get their hands on technology. Minorities remain sidelined as well. In Nepal, if you belong to a lower caste, you are twice as likely to be poor than if you were born in a higher caste. And we know young people comprise a major portion of these populations that are left behind.

As the world focuses on empowering youth to harness the benefits of technology, it needs to ensure that the world’s youth population, 90 percent of which lives in the developing world, has access and capacity to use technology.

It won’t be easy. Youth unemployment levels remain stubbornly high. At least 40 percent of youth live on less than $2 a day. They usually can’t afford the Internet and smartphones.

There are some good initiatives by Google and Facebook already. Google and Internet.org are piloting projects to increase access to the Internet. The cost of technologies is decreasing as well. But for many governments, increasing access to the digital world isn’t a priority, especially for those who are tackling high levels of poverty, instability, unemployment and other pressing challenges.

There ought to be aggressively pushing affirmative action when it comes to connecting these young people with rest of the world.

It’s tempting to be swayed by the popular belief that young people are the most connected and educated and the largest demographic in the world. That’s true. But this generation is also entering the real world where we are seeing unprecedented inequality. Last year, MIT Technology Review published an article on how technology is fueling inequality in the West. The story isn’t so different in the developing world as well.

To ensure everyone has a decent chance to compete in the connected world, the global development community should start with these three things:

Invest in education and digital literacy for all: UNICEF suggests that the poorest students receive up to 10 times less public education than the wealthiest. Donors should ensure women and minorities get access to resources and digital tools. Digital is the language of the 21st century. It should become a core part of education curriculum globally.

Transform access to technology: In the 20th century, the world took bold action to make basic education free. Now it should provide tablets and training to use those tools for free. No one has more power and resources to lead the movement of digital literacy for all than international donors.

Reduce the cost of broadband and increase partnerships for free access: Make broadband a public commodity in developing countries and create parks, libraries and universities where the Internet is available free of charge.

While the poorest and marginalized people from the villages of Nepal to the sprawling metropolis of Nairobi and beyond are waiting to get their hands on technology, revamped and robust strategy to increase opportunities should be implemented. For instance, investment in education should be targeted towards marginalized people and the development community should open access to knowledge not just online but offline, too. Governments should invest in basic infrastructure projects that will create good jobs, improve the quality of life and spur businesses.

I’m a proponent of ICT use to help people living at the bottom of the pyramid. But we must not forget that access to ICT is no panacea. Kids and parents I meet in villages like my own want education, roads, and jobs, to name a few. The ability to afford and capacity to benefit from mobiles phones and online education will be icing on a cake.