UNITED NATIONS (AP) — With the bang of a gavel, international leaders approved an ambitious 15-year plan Friday to tackle the world's biggest problems, from eradicating poverty to preserving the planet to reducing inequality. Now comes the tough part: Drumming up support and money to achieve the goals and transform the world.

Pope Francis gave his backing to the new development agenda in an address to the U.N. General Assembly before the summit to adopt the 17-point plan opened, calling it "an important sign of hope" at a very troubled time in the Middle East and Africa.

Then, the summit immediately turned to the real business of the three-day meeting — implementation of the goals, which is expected to cost $3.5 trillion to $5 trillion every year until 2030.

U.N. Secretary-General Ban Ki-moon set the stage, saying the agenda "embodies the aspirations of people everywhere for lives of peace, security and dignity on a healthy planet."

The goals "are a to-do list for people and planet, and a blueprint for success," Ban said.

The document, titled "Transforming our World: The 2030 Agenda for Sustainable Development," not only outlines 17 broad goals but sets 169 specific targets.

The non-binding goals succeed the eight Millennium Development Goals adopted by world leaders 15 years ago. Only one of those has been achieved: halving the number of people living in extreme poverty, due primarily to economic growth in China. At least one other is close — cutting in half the proportion of people without access to clean water — and there are still three months until the goals expire.

The new goals include ensuring "healthy lives" and quality education for all, clean water, sanitation and reliable modern energy, as well as making cities safe, reducing inequality within and among countries, and promoting economic growth and good governance.

Critics say they are too broad, lack accountability and will lead to disenchantment among those most in need of hope.

Supporters say there is no choice but to go big in a world of expanding population, growing inequality, dwindling resources and the existential threat from global warming. They note that while the millennium goals were developed by then secretary-general Kofi Annan and his staff, the new goals are the result of years of negotiations by all 193 member states, which means they should all have a stake in their achievement.

Sweden announced that a group of nine leaders from different regions will work to ensure implementation of the goals. It includes German Chancellor Angela Merkel, the presidents of Brazil, Colombia, Liberia, South Africa, Tanzania and Tunisia and the prime ministers of Sweden and East Timor.

Speaker after speaker pointed to the spread of extremist groups as barriers to development, perhaps none more eloquently than Nobel Peace Prize laureate Malala Yousefzai, who was shot in the head by the Taliban in Pakistan in 2012 for campaigning for girls' education.

Standing in the assembly chamber's balcony surrounded by 193 young people representing every country, Malala told the leaders: "The future generation is raising their voice." Each teen held a lantern, which she said symbolized their hope that the new global goals will be achieved.

Millions of children are suffering from "terrorism, displacement and denial of education," Malala said, noting the heartbreaking photo of 3-year-old Syrian refugee Aylan Kurdi lying drowned on a Turkish sea shore and the tearful parents of girls abducted from their school in northern Nigeria by Boko Haram.

"Promise peace to all children in Pakistan, in India, in Syria and in every corner of the world," Malala implored the leaders.

"Promise that every child will have the right to safe, free and quality primary and secondary education," she said. "Education is hope. Education is peace."

Egyptian President Abdel-Fattah el-Sissi said the international community has to deal with global challenges that hinder development — "especially terrorism" which isn't confined to Arab nations but has spread worldwide.

In pursuing development, he said, the Egyptian people are facing "the most dangerous extremist terrorist ideology."

Egypt has been fighting an insurgency by Sinai militants allied to the Islamic State group. At the same time, security forces have cracked down on Egypt's Muslim Brotherhood and other Islamists since the military — then led by el-Sissi — ousted President Mohammed Morsi, a senior Brotherhood figure, in 2013 after massive protests against Morsi's rule. Hundreds of Islamists have been killed and thousands arrested.

El-Sissi also expressed concern that "the tools" to achieve the goals are insufficient, and stressed that richer nations have a responsibility to help poorer ones.

Afghan leader Abdullah Abdullah, whose country is one of the world's poorest, urged "political commitment and revitalized partnership" to achieve the goals.

The head of Amnesty International used his speech to make an impassioned critique of mass surveillance, the arms trade, income inequality and human rights abuses.

"You cannot launch these goals and in parallel deny a safe and legal route to refugees, a life with dignity," Amnesty's Salil Shetty added.

Merkel told fellow leaders there is no quick solution to the migrant crisis that has seen hundreds of thousands of people fleeing war, poverty and persecution flood into Europe and safe havens closer to home.

India's Prime Minister Narendra Modi said eliminating poverty is the top priority in his country, which has the world's largest number of people living in extreme poverty.

Modi confirmed plans for a fivefold boost in renewable energy but added two years to the time frame, saying it will take seven years instead of five.

As for finding the trillions needed to implement the goals, Kenya's U.N. Ambassador Macharia Kamau has insisted it can be done. But Microsoft co-founder and philanthropist Bill Gates said Thursday "we'd be doing very well to have anywhere near that amount of money available by 2030."

Associated Press writer Cara Anna contributed to this report from the United Nations. 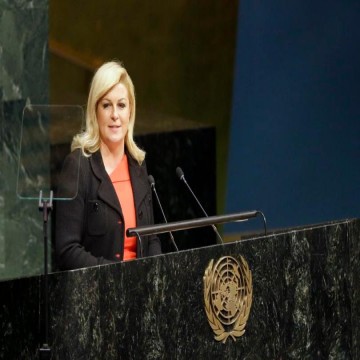