The global economy grew at 4.49 percent in 2013, and the gross world product reached $87 trillion.1 For the fourth year in a row, the growth rate was slower than during the preceding year.2 Growth was affected by numerous adjustments in macroeconomic policies, by high unemployment rates, and by weak aggregate demand in the majority of the industrial economies in the Organisation for Economic Co-operation and Development (OECD).3 By contrast, emerging and developing markets continued to experience higher growth rates due to supportive policies. In fact, in 2013 emerging markets accounted for 50 percent of total global growth.4 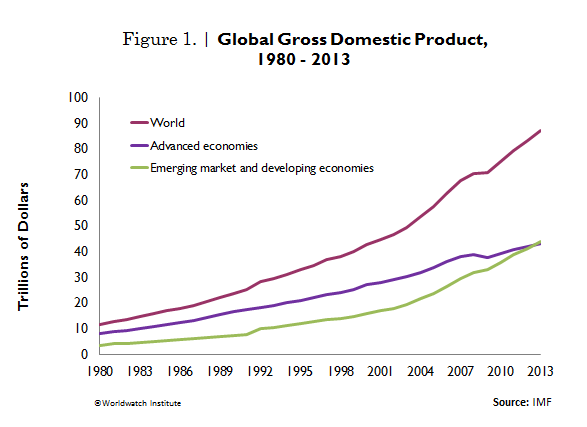 Economic prosperity is often reduced to the lens of growth in gross domestic product (GDP). This is considered the most widely applicable metric for gauging progress and well-being. The gross world product is the sum of the GDPs of all countries. This typically includes levels of consumption, investment, government spending, the cost of imports, and the proceeds from exports.5 Because of various transaction costs, floating exchange rates, and barriers such as tariffs, economists apply a metric to put purchasing power for countries on an even footing. This metric, applied to the figures in this article, is called the purchasing power parity exchange rate.6

The International Monetary Fund forecasts growth among developing economies to rise from 4.7 percent in 2013 to 5 percent in 2014 and then to 5.25 percent in 2015.7 This growth can be traced to the rise of an affluent middle class and a rapid migration of young workers to cities, which encourages more business investment in developing countries.8 According to the United Nations, Asia and other emerging economies will account for two thirds of the approximately 370 million people who will have moved to cities by 2015.9 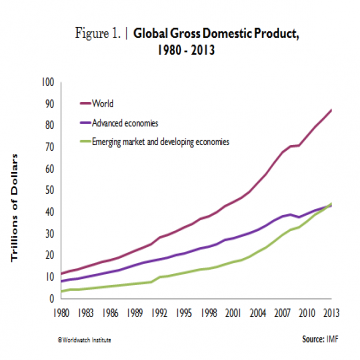