Visualizing Oil Addiction In The U.S.

A tiny percentage of the United States uses more than 10% of all our oil. If we want to cut back, these people might be a good place to start.

Look around--petroleum is everywhere, even if you can’t see it. It’s used to manufacture your contact lenses, your soda bottles, your medication, and the packaging of your frozen foods. Most noticeably, it’s in your car (unless you drive an electric vehicle or use biodiesel). But not all places consume petroleum at the same rate, even in the gas-guzzling U.S. 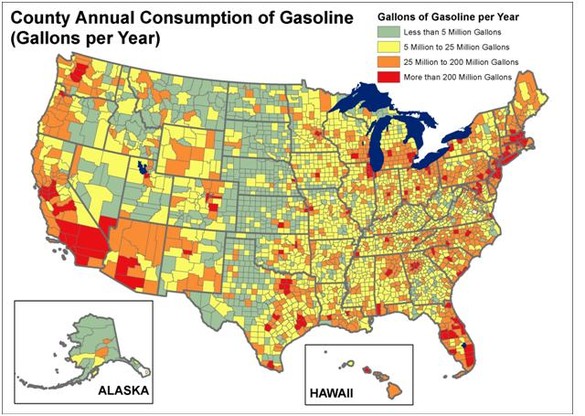 The Natural Resources Defense Council, Sierra Club, and League of Conservation Voters teamed up in September to create a map visualizing oil use in the country. The groups examined gasoline consumption in every county in 2010 to make the map above.

The map indicates that some counties

consume significantly more oil than others. According to the NRDC, 108 counties (out of the 3,144 counties in the U.S.) use over 10% of the country’s oil. The top 10 gas guzzling counties are, of course, ones that lack extensive public transportation options. As you can see in the graphic here, four of the top 10 counties are in Texas. The biggest oil-consuming county is Los Angeles, with 147 gallons of oil consumed per person every year. It’s no coincidence that L.A. is known more than almost anywhere else in the country for its car-heavy culture.

NRDC provides a number of suggestions for reducing oil addiction in these areas, including improving access to public transit systems, increasing overall transportation choices, and upgrading fuel efficiency. That’s all easier said than done, but there is some hope: the government’s new fuel economy standards are expected to cut downon U.S. oil consumption by 12 billion barrels, saving over $1.7 trillion.

Visualizing Oil Addiction In The U.S.