* Any views expressed in this article are those of the author and not of Thomson Reuters Foundation.

There's no silver bullet to sustainable development, but to avoid conflicts, disasters and damage to ecosystems, water agenda must advance on political arena

Every year on 22 March we celebrate World Water Day. But this year is different. It will go to history as the year when we set the course for the future.

When the post-2015 development agenda is finalized this fall, it will shape the global agenda for water. But not only for the 10 to 15 years to come: the decisions we make this year and the paths we choose will influence generations to come.

Today, freshwater resources and their ecosystems are being degraded and depleted at an alarming speed – this despite our awareness of their pivot role to life on earth and the production of food, energy, goods and services.

With rallying population growth and urbanization, unsustainable patterns of production and consumptions, and the increasing frequency and severity of climate change-related weather events, matters are more urgent than ever. It’s time to act.

2015 marks the end of the period for the Millennium Development Goals (MDG). These goals brought great progress as well as valuable lessons for the future.

The MDG target for drinking water was reached already in 2010, but still one out of ten people around the globe lack access to an improved water source.

Further, the definition of “improved” does not take water quality into account, neither the reliability of services, making the proportion of people without permanent access to safe drinking water considerably higher.

As for sanitation, almost 4 out of 10 do not use an improved sanitation facility, and 1 billion people still practice open defecation, making this target the most lagging among all of the Millennium Goals.

Discrimination and inequality in access also remain, in between and within countries, between rich and poor and between rural and urban areas. In terms of monitoring, data disaggregation must be improved to ensure that no one is left behind because of their gender, age, disability, education, ethnicity, language or religion.

One clear lesson from the MDGs is that water-related challenges are not limited to drinking water, sanitation and hygiene but stretch across the whole water cycle. This includes water resource management, water use efficiency, ecosystems, water quality, wastewater, water governance, disasters management and transboundary issues.

Although there is international consensus that water needs to be addressed in a comprehensive way the post-2015 development, agenda is yet to be finalized.

So far the ongoing intergovernmental process looks promising: in July 2014, the Open Working Group of the United Nations - the group comprised of Member States tasked to propose Sustainable Development Goals – presented their final report. ‘Securing Sustainable Water and Sanitation for All’ was one of the proposed goals.

On 10 September 2014 the UN General Assembly adopted a resolution deciding that the proposal of the Open Working shall be the main basis for integrating sustainable development goals into the post-2015 development agenda – a process which now has entered its final phase.

A dedicated water SDG is needed and it is also clear that water is linked to the success of many of the other proposed goals. Water resources, and the range of services they provide, underpin poverty reduction, economic growth and environmental sustainability.

Water is the primary medium through which climate influences Earth’s ecosystem and has a pivotal role for adapting to climate change. From food and energy security to human and environmental health, water contributes to improvements in social well-being and inclusive growth, affecting the livelihoods of billions.

Water in the SDGs also provides us with a solid example of some key success criteria for the future: collaboration, coordination and coherence.

When the UN-system was called upon to provide technical input to the SDG process, the UN entities working with water got together under the UN-Water umbrella, to agree upon the priorities for the post-2015 water agenda. This enabled a coherent and consistent voice on water issues.

The collaboration also set an example for solutions orientation that can inspire future work. Cooperation between and across sectors between local, national and regional governments, civil society, business and international organizations will have to be the building block when we create the future we want.

There is no silver bullet to sustainable water development, but to avoid scaling up water use conflicts, pro-actively address water related disasters, avoid permanent damage to ecosystems and the depletion of resources, addressing the larger water agenda must advance on the political arena.

It is time to fulfill the human right to drinking water and sanitation for all, to manage water sustainably across all countries and regions and efficiently across all sectors.

Water holds the key to unlocking economic growth and prosperity if we manage and allocate it wisely. It is time to act and 2015 is certainly the year to do so. Happy World Water Day! 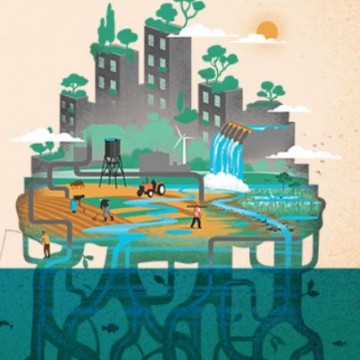