How much of the world's cropland is actually used to grow food? 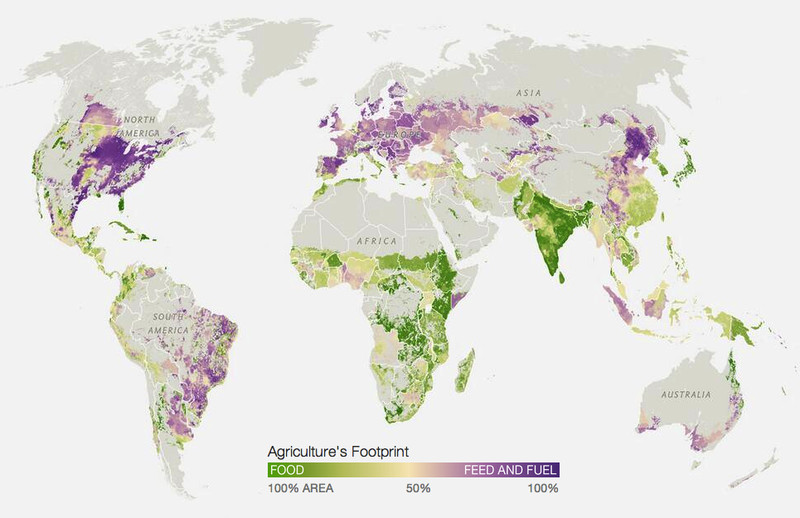 Just 55 percent of the world's crop calories are actually eaten directly by people. Another 36 percent is used for animal feed. And the remaining 9 percent goes toward biofuels and other industrial uses. (Those figures come from this paper by Emily Cassidy and other researchers at the University of Minnesota's Institute on the Environment.)

The proportions are even more striking in the United States, where just 27 percent of crop calories are consumed directly — wheat, say, or fruits and vegetables grown in California. By contrast, more than 67 percent of crops — particularly all the soy grown in the Midwest — goes to animal feed. And a portion of the rest goes to ethanol and other biofuels.

Some of that animal feed eventually becomes food, obviously — but it's a much, much more indirect process. It takes about 100 calories of grain to produce just 12 calories of chicken or 3 calories worth of beef, for instance.

So why does this map matter?

The map itself comes from Jonathan Foley's fascinating, visually rich exploration in National Geographic of how we can possibly feed everyone as the world's population grows from 7 billion today to 9 billion by mid-century. (Foley directs the University of Minnesota's Institute on the Environment.)

Feeding 9 billion people won't be easy: that's basically like adding two new Indias to the world in the next few decades. And, making matters even trickier, humans have now cultivated most of the world's arable land and are pushing up against the limits of freshwater consumption. So the traditional strategy of "find new farmland to grow more food" is getting even harder.

There are lots of possible strategies here. Farmers could increase agricultural productivity by boosting crop yields — either through new farming techniques or through improved crop genetics. But even if the rapid rate of improvement in crop yields over the 20th century continued, that still wouldn't produce enough food for everyone.

Another possibility, as the map above shows, is that the world could devote more existing farmland back to feeding people. Again, as the numbers suggest, just 55 percent of crop calories go directly toward people. The rest goes toward biofuels or animal feed. Humans can't eat biofuels, obviously. And animal feed is also an inefficient way of feeding people — about one-tenth as efficient, on a calorie basis, as eating crops directly.

One implication of that is that, as countries like China and India grow and consume more milk and meat, the pressure on global farmland will grow. But, alternatively, if the world shifted even a small portion of its diet away from resource-intensive meats or grew fewer biofuels, we could wring more food calories out of existing farmland.

There are other strategies too, which Foley details in his piece. Many countries still don't farm as efficiently as they could due to insufficient fertilizer use. And a lot of food still gets wasted, either by consumers or due to poor storage infrastructure. In August 2014, one of Foley's colleagues, Paul West, published a paper in Science showing that farming tweaks in just a handful of countries could fix a lot of these inefficiencies.

How much of the world's cropland is actually used to grow food?