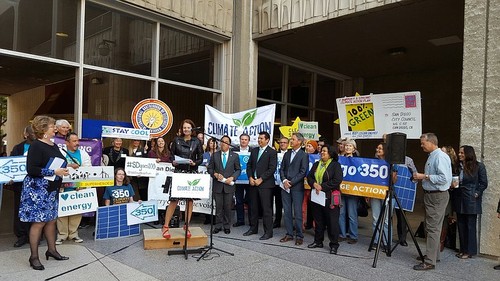 The group in charge of ensuring San Diego's ambitious Climate Action Plan is carried out will have its first meeting Friday.

Mayor Kevin Faulconer's plan — which commits the city to slashing greenhouse gas emissions in half by 2035 — was passed unanimously by the City Councilin December 2015.

Passage was a big step, but more important is making sure the benchmarks are met, said Nicole Capretz, director of the environmental advocacy group Climate Action Campaign.

That's where the working group comes in. Its 16 voting members represent diverse interests that have clashed in the past, including San Diego Gas & Electric, the San Diego Regional Chamber of Commerce, the Environmental Health Coalition, Circulate San Diego and the Building Industry Association. The group will advise the City Council's Environment Committee, which in turn makes recommendations to the full City Council.

The Climate Action Plan outlines a series of goals, including moving the city to only renewable energy sources, redirecting 90 percent of the city's garbage away from landfills and cutting the number of San Diegans who commute by car from 87 percent to 50 percent by 2035. That goal applies to people who live within a half mile of existing or planned transit stops, which is predicted to be about 60 percent of the population by 2035.

How the city will achieve these goals is "a mystery to us" at this point, Capretz said.

"It's important to give feedback ahead of seeing that plan, and then after, so we're all on the same page," she said. "We'd like to believe that all the stakeholders that testified in favor of this plan believe that implementing the plan is just as important as passing the plan."

City staff are drafting an implementation plan now, which is expected to be released in April. Big questions that remain are how the city will pay for its carbon-cutting goals, how plans to update individual communities will be brought in line with benchmarks to slash car commutes and whether the city will pursue an alternative energy program called community choice aggregation.

Community choice would take the energy-buying power away from SDG&E and give it to the city. The city is now conducting a feasibility study for whether community choice would be cost effective and would allow the city to reach the objective of using only renewable energy by 2035.