Alaska’s sweltering summer is ‘basically off the charts’ 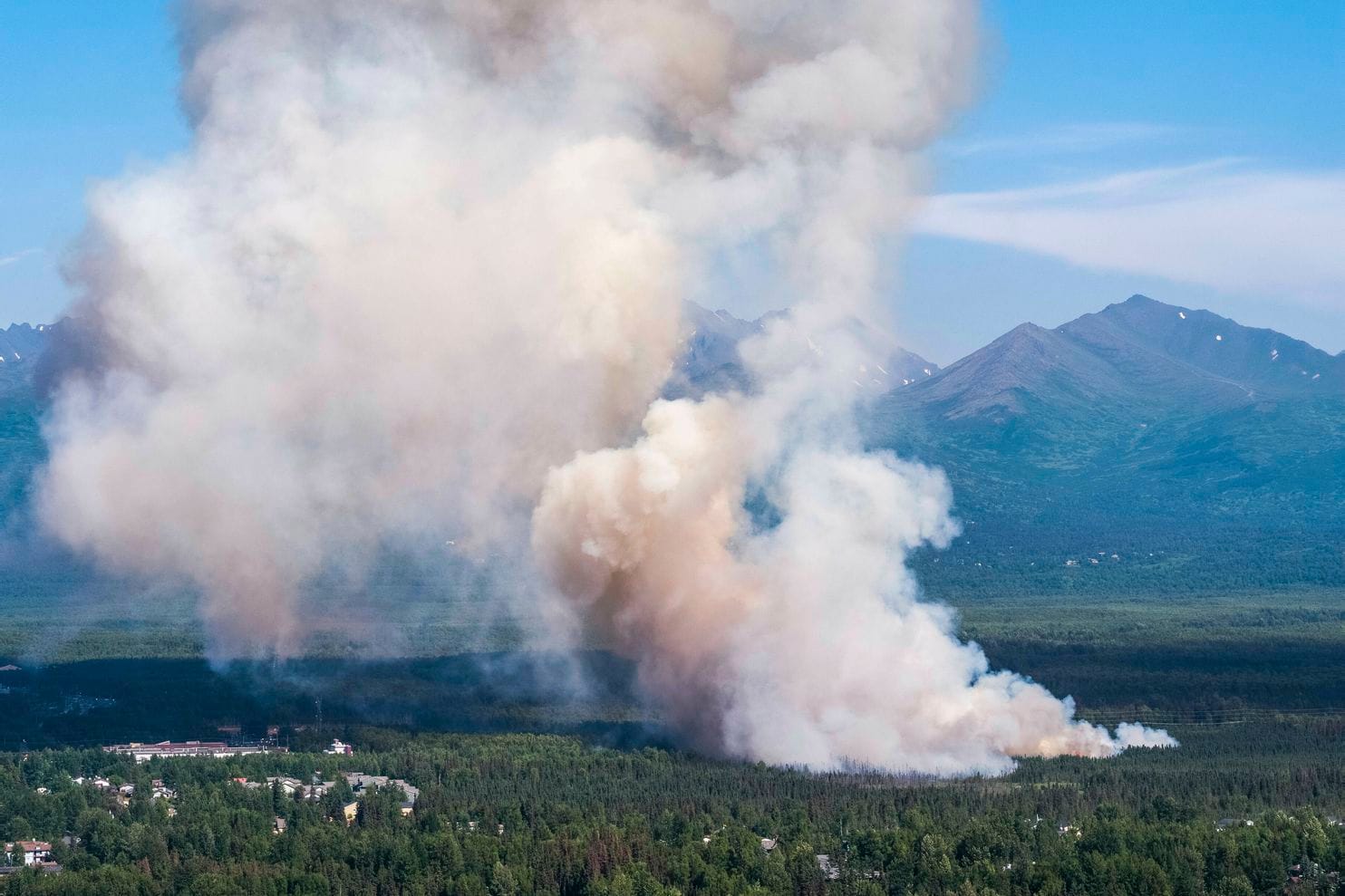 Steve Perrins didn’t see the lightning, but he couldn’t miss the smoke that followed.

It was around dinnertime on July 23 at Alaska’s oldest hunting lodge, nestled in the wilderness more than 100 miles northwest of Anchorage. What began as a quiet evening at the Rainy Pass Lodge soon turned frantic as Alaska’s latest wildfire spread fast.

The Alaska National Guard soon evacuated 26 people and two dogs by helicopter from the lodge, which serves as a checkpoint for the Iditarod Trail Sled Dog Race.

The fire came within a half-mile of the lodge. In the days that followed, Perrins and his family housed and fed dozens of federal and state firefighters who rushed to contain the blaze — one of many raging across Alaska.

The nation’s 49th state is warming faster than any other, having heated up more than 2 degrees Celsius (3.6 degrees Fahrenheit) over the past century — double the global average. And parts of the state, including its far northern reaches, have warmed even more rapidly in recent decades.

This trend, driven in part by the burning of fossil fuels, is transforming the nation’s only Arctic state. Scientists around the world, including in the U.S. government, predict the warming will continue unless countries drastically reduce their greenhouse gas emissions in coming years.

Temperatures have been above average across Alaska every day since April 25. None of the state’s nearly 300 weather stations have recorded a temperature below freezing since June 28 — the longest such streak in at least 100 years. On Independence Day, the temperature at Ted Stevens Anchorage International Airport hit 90 degrees for the first time on record.

More than 2 million acres have gone up in flames across the state as thousands of firefighters have worked to contain wildfires. Stores have sold out of fans and ice. Moose have been spotted seeking respite in garden sprinklers.

“Usually if you were to break this sort of record, you’d do it by a sliver of a degree,” said Brian Brettschneider, a climatologist and research associate at the International Arctic Research Center. He said that the state is on course to shatter the record by more than one degree Fahrenheit.

The entire Arctic is suffering under extreme temperatures. In Siberia, sweeping wildfires are sending smoke thousands of miles away and lofting dark soot particles onto the vulnerable Arctic ice cover. Arctic sea ice is melting at an alarming pace and could break the 2012 record. In addition, the weather system that caused last week’s heat wave in Western Europe has now settled above the Atlantic side of the Arctic, accelerating surface-ice melting in Greenland. A forest fire rages alongside the "Road of Bones," outside of Atka, Russia, in July. (Michael Robinson Chavez/The Washington Post)

Mark Parrington, a senior scientist with the Copernicus Atmosphere Monitoring Service in Europe, said that through July 28, wildfires in the Arctic region, including Siberia and Alaska, had emitted 125 metric megatons of carbon dioxide — the highest of any year-to-date since such monitoring began in 2003.

“We’re seeing something exceptional this year,” Parrington said, even though the acreage burned in Alaska is not yet a record.

Even as researchers in Alaska are working to capture climate change’s impact on the region, sharp cuts by Gov. Mike Dunleavy (R) to the state’s education budget threaten to trigger an exodus of some of the very scientists who are trying to explain the unprecedented changes that residents are experiencing.

“I think it will lead to many of the best Arctic scientists in the UA system [leaving] the state,” Christopher Arp, an associate research professor at the University of Alaska at Fairbanks Water and Environmental Research Center, said in an email. “Having scientists live where they do research is very important in my view, so I think that will have a negative impact on Arctic research that will be very challenging to reverse.”

The early retreat of sea ice from the Bering and Chukchi seas has led to a jump in sea surface temperatures, altering weather patterns and upending the lives of residents who typically depend on the ice cover for hunting and fishing. It’s also affecting native species, including seals and seabirds.

George Divoky, a longtime Arctic biologist and ornithologist, said that the summer’s high temperatures in the Bering Sea have been devastating for the colony of black guillemots he has been studying on Alaska’s Cooper Island since 1975. The spike in water temperatures has made it difficult for them to find the cod and zooplankton they depend on.

“In the first week after hatching, half of the 120 chicks that hatched had starved to death,” he said. “Many of the chicks that remain alive are not growing, and we expect most of them to die.” People with their dogs swarm to DeLong Lake, hoping to stay cool in the record-breaking heat in Anchorage in early July. (Anne Raup/AP)

As of July 28, the Chukchi Sea, northwest of Alaska, had just 20 percent of its ice cover left — a record low for this time of year, according to figures from the National Snow and Ice Data Center.

Michael Wald, a wilderness guide, was paddling recently in Demarcation Bay on the Beaufort Sea coast. He had traversed those same waters a decade ago and had a hard time finding a campsite because of ankle-deep muck each time he pulled ashore.

This time, he found the ground parched.

“The tundra is so dry you could camp anywhere,” Wald said in an interview. “It was almost unrecognizable.”

In south-central Alaska, residents face a different outlook: streams that are running high because snow and glaciers are melting quickly. While this is peak season for fly-in fishing trips, some pilots have had to revise their fight plans, wary of dropping off clients near rivers that are surging from the snowmelt.

The hot days, tinged with wildfire smoke, also have meant a run on fans and air conditioners in a place where few people have needed them.

“Most homes in Alaska are built to trap heat inside,” said Rick Thoman, an Alaska climate specialist at the International Arctic Research Center. “So you get the choice between it being super hot and stuffy inside, or very warm and smoky outside.”

Tim Craig, who owns Anchorage True Value Hardware on Jewel Lake Road, calculated that his fan sales are up 125 percent compared with last year. From mid-June through last week, he said, every fan that arrived in his store’s weekly shipment was either spoken for ahead of time or gone by day’s end.

“People were desperate,” he said.

A raincheck notice for fans is posted on empty shelves at a True Value Hardware store in Anchorage. (Anne Raup/AP)

Merritt Turetsky, a fire scientist at the University of Guelph, said that having major fires on multiple continents at the same time is unique. When fires burn for an extended period in these ecosystems, she said, they can smolder and enter deeper soils, liberating carbon that has been stored for thousands of years.

Much of northern and central Alaska is covered by permanently frozen soil known as permafrost. When this icy soil melts, the organic matter within it decomposes and releases long-buried stores of greenhouse gases, including carbon dioxide and methane. This, in turn, speeds up global warming. Scientists are increasing their focus on the pace and extent of permafrost melt.

Atop the permafrost sits an insulating layer of moss and lichen a few inches thick. In the summer, unusually warm temperatures and scant rainfall have made it a breeding ground for blazes. “The weather has been impacting fire behavior a lot,” said Alan Hickford, a meteorologist at the National Weather Service in Fairbanks. “The fires start easier and spread easier.”

The recent spate of record warmth has affected more than just life on land.

“In Nome, Pacific cod have been showing up in crab nets. They used to be extremely rare in the North Bering Sea,” Thoman said. “Meanwhile, salmon have been reportedly dying, suffocating as water temperatures climb and less dissolved oxygen remains in the water.”

According to the National Oceanic and Atmospheric Administration, Alaska produces more than 50 percent of the fish caught in U.S. waters, with an average wholesale value of nearly $4.5 billion a year. “More people are employed there than in any other industry,” Brettschneider said.

At the Rainy Pass Lodge, Perrins is trying to make the best of a harrowing and baffling summer. Before the fire that nearly burned his property, the string of hot days had made it possible for guests to swim in nearby Puntilla Lake, which in the past had been too frigid for out-of-towners.

Now, his top priority is following the advice of firefighters who suggested that he clear trees and brush to make a wider buffer around his lodge against wildfires. They told him to plant more grass instead.

Perrins, who recently purchased a new John Deere riding lawn mower and had it flown in from Anchorage, plans to do just that.

“We’re going to have a lot more to mow next year,” he said. A man suns himself at Goose Lake, in Anchorage, in early July. (Mark Thiessen/AP) 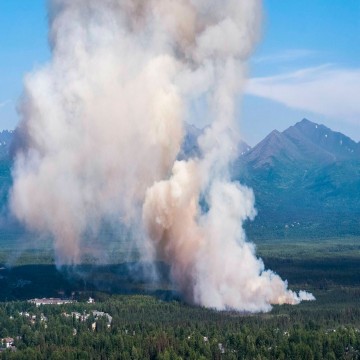